cgshort
Consisting of 140 VFX shots, the illusion battle between Spider-Man and Mysterio in Spider-Man Far From Home was so full of CGI that if we were to show you behind the scenes footage of the fight without CGI, it would look like this…
No, neither Tom Holland nor Jake Gyllenhaal were filmed for the most part of the entire sequence, and definitely not this guy.
So, instead of just showing the scene without VFX, which would just be a blank screen, were going to take you behind the scenes to find out just how the guys at Framestore created this amazing sequence.

The sequence for the illusion battle wasn’t ever set in stone and actually ended up being made while it was being designed.
So, aside from all the VFX work, Framestore was also encouraged to come up with creative designs of the ‘Illusion Battle’ sequence.
To do this, they started with a pre-visualization by Proof and began building storyboards and concept artwork, adding movie references and other things to put Spidy in all sorts of uncomfortable scenarios.
By the time they were finished designing the sequence, they had only 8 weeks to complete it.

Fortunately, Framestore was able to quickly present concept ideas to the team over at Marvel, by sending rapid prototypes, made by modelling as much as they could in 2D while using as much stock footage as they could, as well as a 2.5D projection technique. This allowed them to promptly and efficiently produce a kind of animated storyboard full of ideas and sequences, for the client to decide upon.


For the shots where Spider-Man ends up pulling a crane through the hologram effect, all the action was first blocked with concepts before VFX work started. The environment and action were completely created from scratch which gave the animators a nice amount of freedom to add or remove shots in order to get the timing and feel of it all spot on.

The spooky green smoke that we see pour into each scene was done in Houdini and, also, really added to the spookiness of seeing Iron Man as a zombie.
The resurrected Iron Man needed to be chilling but not too horrifying or gory while at the same time looking pretty cool.

Due to the fact that Framestore was working on the sequence before any shots had actually been filmed, they were also able to help out with the shots on set.
Now, most of the shots were fully CG but there were some that really needed to be done by the actors themselves. Like, for example, the scene where Mysterio grabs MJ.
However, due to the scene not having yet been filmed, Framestore was able to take advantage and block out the animation with a CG version of MJ before the shooting began.
This way they could light a scene with precise lighting information for the position of the Eiffel tower lights and also the light from the moon, and render it before passing to production making whatever they filmed on set be, pretty much, the exact plate material they needed.

And lastly, whenever our hero breaks out of the illusion world there’s a blue sparkly transition, based on the transition we see in the B.A.R.F technology scene in Captain America Civil War.
The transitions move slowly, revealing the real world bit by bit.
Framestore helped drive the voxelization process before passing it on to the comp team for the final look in Nuke. 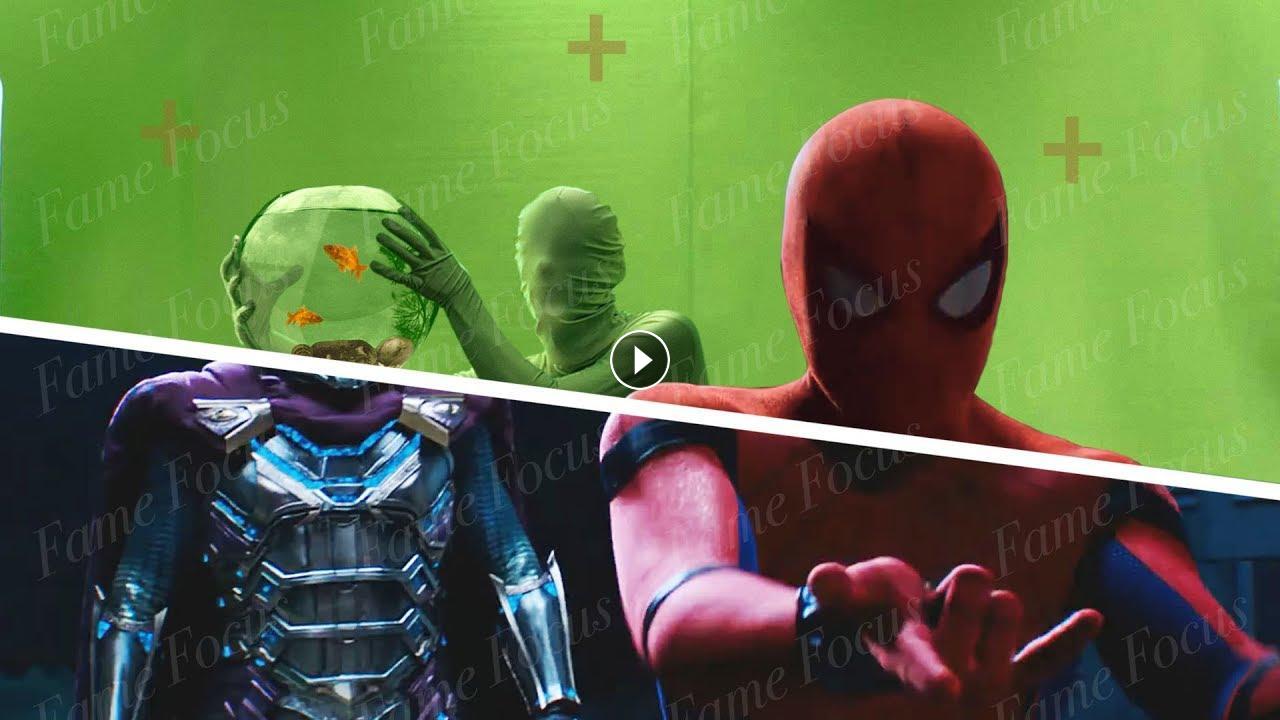 Consisting of 140 VFX shots, the illusion battle between Spider-Man and Mysterio in Spider-Man Far From Home was so full of CGI that if we were to sho...